We are  programming for forthcoming screenings

If you have a film that broadly fits within these themes(no longer than 10 minutes) send it to us for consideration at shortcircuitopencall@gmail.com with a link to the film(and password if required) Please include a short description and jpeg still. We will contact you if your film is selected.

CHANGE   Looks at how we see change. Transforming the form, nature or the future course of something from what it already is.
Deadline 30th September

FLIGHT    Retreating or running away? The power of flying- or a high flyer?
Deadline 28th October


NEXT OF KIN will be showing some stunning, and at times painfully poignant, short films exploring the affectionate, sometimes tense and always influential experience of 'family'.
A great opportunity to enjoy an evening checking out new and established filmmakers. 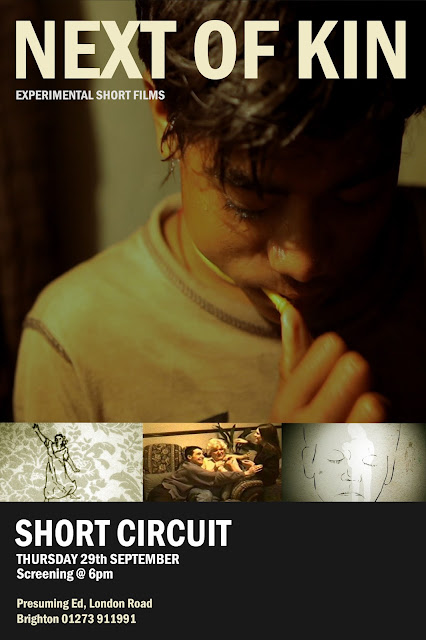 MARY BILLYOU   Idyll    5:32 mins  Fewer families were born, lived, and died in the same place. People, especially young ones, were ready for a new life, as far removed from the old one as possible. Living space was much smaller and there were few, if any, servants. Many wives were working outside the home and leisure was not to be spent doing housework, but in being out of doors as much as possible. Emphasis was on informal living and informal entertaining.

IAN NESBITT   Don   6:51 mins
Don is a 69 year old man originally from Nottingham. Having travelled and lived all over the world working as a banjo player and gardener for the last 30 years or so, he eventually found his way home in late 2011. When I met him, he was sleeping rough, didn't know how he'd got back to this country, had almost no short term memory, and no-one would take responsibility for his care. The film is one in a series of idiosyncratic portraits of people living on the peripheries of contemporary consumer society.

JOSH WEISSBACH   38 River Road   7:13 mins
The voice of a figureless character is heard. The figure of a voiceless character is seen. A sequence of estranged voicemails is framed by unidentified events. Fear resides in the gesture of a telling.

KATE JESSOP   Dear Foreigner   5:10 mins
A woman's letter to the son she gave up at birth, 27 years later.
The screen adaptation of a real award winning letter, commissioned by Festival D'Elle Lettere, Milan.

SHARONE LIFSCHITZ
Best city in the World-Looking after Belfast (Raymond’s Loss) 19:26 mins
In early April 2010, the artist placed an advertisement in several Northern Irish newspapers: “Israeli woman visiting Belfast would like to meet people for advice about sharing a country.” One respondent was Raymond McCord, a Protestant, whose son was murdered by members of a Protestant militia during the conflict in Northern Ireland. A year after their initial meetings, McCord took the artist in his car to see the locations where his story is played out. The video was shot by the artist with a handheld camera from the passenger seat.

ANDREW HINTON   Amar   9:40 minsAmar is 14 and top of his class. Someday he'd like to be a professional cricketer, but for now he's the family's main breadwinner, working two jobs six and a half days a week on top of attending school in the afternoons. This short observational documentary is a simple journey with Amar through his daily life.
Posted by Unknown at 03:30 No comments: