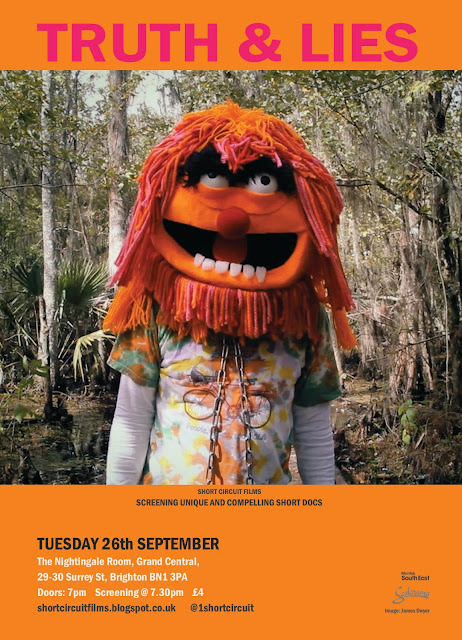 MY SISTERS DOLLHOUSE  Jim Archer  2:27 mins
A filmmaker tries to discover himself by making a film... he fails.
A parody, of sorts. 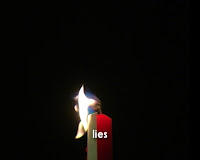 THING THAT WASN’T POSSIBLE IS HAPPENING TODAY
Annabeata Baranska  2:24 min
The film is a critical commentary to 2007 parliamentary elections in Poland. The reality is presented as an overwhelming, embarrassing world which provokes uneasiness, the sense of absurdity, nonsense or even grotesque. At first, the main element of the film – a white and red candle – is burning with a strong and stable flame. However, once the political language (full of lies, aggression, mutual accusations and incomprehensible barking)  appears, the flame becomes unstable and eventually fades away.

PRIMEIRO DE NOVEMBRO   Yuri Pirondi  6.00mins
Primeiro de Novembro (1st of November), All Saints’ Day 1755 was the date of the most deadliest earthquake in the world, followed by a tsunami and a fire, completely destroyed Lisbon.Through a cyclical story-telling, the mythological city of Ophiusa has reborn, where the memories of the ancient earthquake and the omens of the future one are linked through a stream of consciousness, past and future melt together in one dimension: a timeless present. 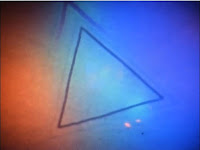 EVERTHING TURNS  Aaron Zeghers  12.30 mins
UK PREMIERE
A shorthand study of the mythology of numbers, from 1 to 12. Scientific tradition is adopted then eschewed for rumours, legends and defunct theories from across the ages. The camera pens a year-long almanac of space, movement and the passing of time, recorded in-camera onto Super 8 using open exposure photography, light painting, light table animation, paper animation, hand drawn animation and more.

BEDSIDE MANNER  Corinne Botz   18:03 mins
Bedside Manner focuses on real-life standardized patient simulations to explore the performative aspect of doctor-patient encounters and issues concerning empathy. Standardized patients (SPs) are professional medical actors who are trained to present particular sets of symptoms in order to help medical students improve their diagnostic skills and bedside manner. Simulations delineate a space in which viewers and participants are asked to suspend disbelief and rehearse for trauma. In addition to offering viewers a rare glimpse into the practice of training doctors, the uncanny medical simulations also reveal the tenuous boundary between the real and artificial.

BULLSHIT!  James Nee &  Christian Britten   5:50 mins Harry Frankfurt is an American philosopher and author of the New York Times Best Seller "On Bullshit". Although first conceived as an essay over 30 years ago, his theory on bullshit is more relevant than ever before.BULLSHIT! aims to further our understanding of what bullshit is, why there's so much of it, and how it can be a greater enemy to the truth than lies.

MUSTANG JEANS   Marko Schiefelbein   7:13 mins
UK PREMIERE
A women is sitting in front of a camera telling a story about an experience she had. Even though she is able to describe the happenings quite detailed, the story also seems to be unlikely and implausible. It turns out not to be hers rather then a story from a MUSTANG JEANS commercial which she is retelling from the perspective of the main character. The work MUSTANG JEANS draws an abstract image of a human that has internalized the images and stories of the world of advertising.

NEWS FROM THE SUN   Brendan & Jeremy Smythe   3:00 mins
An apocalyptic narrative unfolds through the words of "The Sun," a British tabloid created by media mogul Rupert Murdoch. 4000 single frames were exposed, unedited, and accompanied with the pulsing rhythms of the sun collected by NASA, resembling the Buddhist "Om," the sound of our universe. The Smyth Brothers were commissioned to make this film by Ben Russell for Moogfest 2016 in Durham, NC

DAT LIKWID LAND   James Dwyer  29:00 mins
UK PREMIERE
As a quest to identify a man whose notebook we discovered in a bus station leads us through a city, we move from cemeteries to Cypress swamps. The man’s name is Ignatius and with the words of this self-proclaimed outsider as our agent we too can approach subjects from elsewhere. The film was shot in New Orleans and grew out of an exploration into the relationship between John Kennedy Toole and the main character of his novel, A Confederacy of Dunces; a work that only gained acclaim after the authors suicide.

Programmed by Jayne Wilson
Special thanks to All at Scalarama Brighton, Richard Gravett for Short Circuit, Rob Cunningham & Rachel Hunter at Filmspot, Liam McKeown at Grand Central, & Film Hub SE for their support.