Short Circuit was launched by artist filmmaker Jayne Wilson in November 2015 in a former bank vault in Brighton for an evening of screenings dedicated to short experimental documentaries. With lots of events for film makers and film lovers in the area, nothing specifically addressed the short films and artists experimental work on the broad spectrum of documentary.We moved out of the bank vault in Spring 2017 and found a new home in Central Brighton. 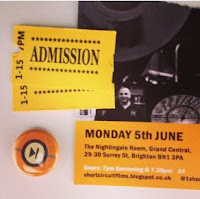 We regularly hold themed screenings at our Brighton venue, encourage filmmakers to submit their films in advance, for  screening alongside invited, emerging, established and award winning filmmakers.

Our focus is to show an eclectic mix of work from exciting and original and challenging international filmmakers,  and to share the broad and creative possibilities of 'documentary' storytelling outside of its traditional forms.